Recover your password
Enter your email that you login with, for the instructions to be sent to your registered email.
Sign in 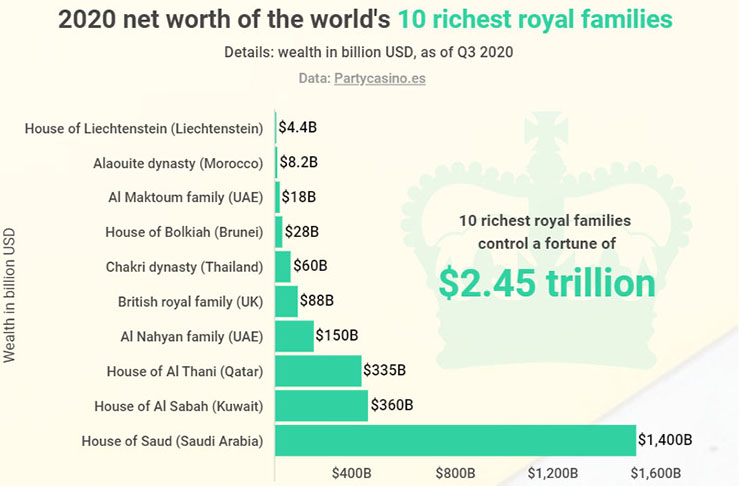 Elsewhere, the Al Nahyan family from the UAE controls a fortune of $150 billion while the British Royal Family closes the top five categories with a fortune of $88 billion.

“With most royals growing in wealth, there have been calls to abolish the monarch due to inequality reasons. Critics argue that the existence of the monarch is unfair. Some believe that the institution is outdated in the wake of a huge financial gap with the rest of the citizens. For example, in the UK, critics argue that the royal family has seen their wealth spike while the rest of the country is attempting to find a way out of the different financial crises.”

The research also overviewed the top ten richest royal family members. The group cumulatively control $114.4 billion. The King of Thailand Vajiralongkorn controls a fortune of $30 billion followed by Hassanal Bolkiah the Sultan of Brunei with a net worth of $20 billion. In the third spot, there is Salman bin Abdulaziz Al Saud the King of Saudi Arabia with a fortune of $18 billion.

Khalifa bin Zayed Al Nahyan is fourth with a fortune of $15 billion while Al-Waleed bin Talal closes the top five spot with wealth worth $13.4 billion.

Get Islamic economy and Halal Industry updates in your inbox